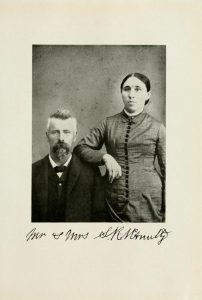 S. R. McAnulty, who is engaged in breeding and dealing in pure-blooded Poland China hogs and Percheron, Belgian and German coach horses, makes his home in Golden.  He is a native son of Adams county, his birth having occurred in Camp Point township, October 31, 1839.  His father, Samuel McAnulty, was a native of Pennsylvania, born in 1800, and the grandfather, Joseph McAnulty, was a native of Scotland but became one of the early settlers of Pennsylvania.  In 1812 re removed with his family to Ohio, settling in Greene county, where Joseph McAnulty was reared to manhood.  He was married in 1826 to Lucinda McFarland, a native of Greene county, Ohio, and in 1831 they came to Adams county, Illinois, locating in Camp Point township.  Here he opened up a farm, becoming owner of nearly five hundred acres of land, which he placed under a high state of cultivation.  Upon this farm he reared his family but later removed to Camp Point, where he spent his remaining days in honorable retirement from further labor.  His death occurred there about 1888, and his wife died four years previous.  In the family were two sons and four daughters, of whom three daughters are yet living.

S. R.  McAnulty, the only surviving son, was reared to manhood on the old homestead farm in Camp Point township, where he attended the common schools through the winter months and in the summer seasons worked on the farm.  After reaching man’s estate he was married in Houston township, March 7, 1861, to Miss Mary M. Pierce, a native of Ohio, who came to Adams county when a child of three years with her father, Isaac T. Pierce.   The young couple began their domestic life in Houston township, where Mr. McAnulty had eighty acres of land.  This he at once began to cultivate and improve and as his rich crops brought him a good financial return he made further purchases until his farm comprised four hundred acres.  He has since, however, sold much of this and now retains possession of a quarter section on which is a substantial residence, good barn and all the necessary out-buildings for the shelter of grains and stock.  He also planted an orchard and divided the place into fields of convenient size by well kept fences and added all the modern accessories of a model farm.  In connection with general farming he is engaged in breeding and dealing in Poland China hogs, pure-blooded horses, constituting Percheron, Belgian and German coach horses.  He has thus become well known as a breeder of both hogs and horses and this department of his business has proved a profitable one.  He removed to Golden in October, 1902, and purchased an attractive residence there, which he remodeled and repaired.  He also bought additional lots and around the place is an iron fence, concrete walks and well kept lawn, and in fact, is one of the attractive homes of Golden.  Here Mr. and Mrs. McAnulty reside.   They became the parents of three children, Minnie J., is now the wife of Clarence Van Nosdell, who is operating the McAnulty farm and they have three children:  Samuel Glen, Elsie and Ada;  Eva M., is the wife of William A. Bottorff, also living on a part of the McAnulty farm, and they have four children:  Ruby, William A., Marion and Hazel:  Lola A. is the wife of Henry Williams, of Camp Point township, and they have two children, Samuel and Lola.

Politically Mr. McAnulty is identified with the democratic party but was formerly a republican and cast his first presidential ballot for Abraham Lincoln in 1866.  While living on the farm he served as supervisor for one term and as road commissioner for seven years.  He was also township school trustee for six years and served on the school board for fifteen years, including a consecutive service of fourteen years.  He belongs to the Ancient Order of United Workmen.  Mr. McAnulty began life a poor man, working at twenty-five cents per day, but his untiring labor and enterprise, together with the assistance of his estimable wife, has enabled him to accumulate a large and valuable property and a good home, so that he is now one of the substantial citizens of the county. 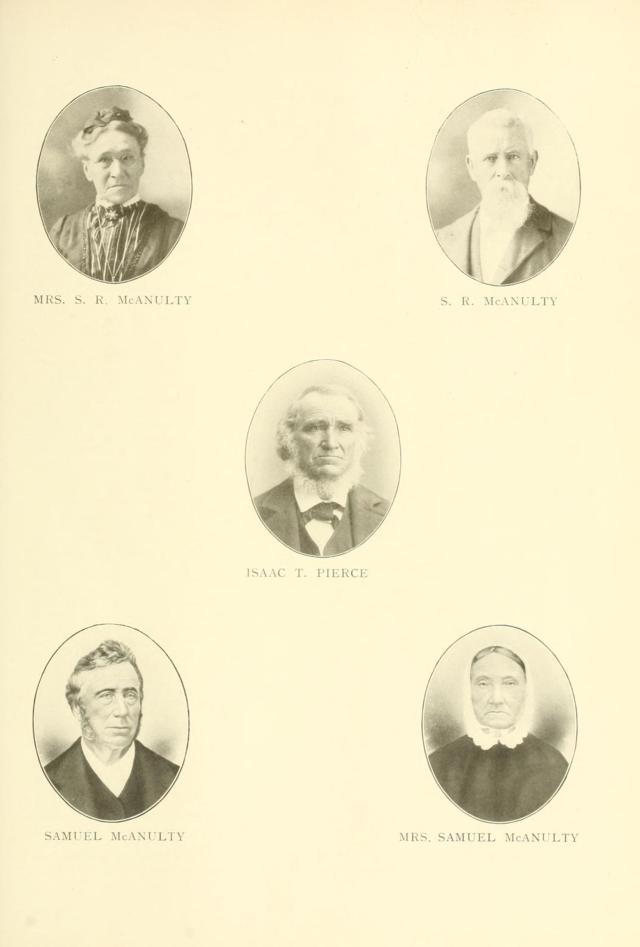