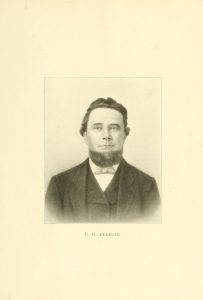 George W. Berrian, deceased, was one of the early farmers of Ellington township. He was born in New York city in 1823 and is descended from French ancestors, who came to America at an early period in the colonization of the new world.

His paternal grandfather was William Berrian, his father William A. Berrian. The latter was born in New York and married Miss Sophia Riker, who was also a native of the eastern metropolis and was a daughter of James Riker. William A. Berrian engaged in merchandising in the east and in 1833 came with the family to Adams county, being six weeks in making the trip. On the 7th of November, 1833 he arrived in Quincy, which was then a mere hamlet, containing only a few houses, while the outlying districts were
largely unsettled, the work of improvement and progress having scarcely begun in this part of the state.

After a year spent in Quincy, Mr.  Berrian purchased a farm from his brother, Washington Berrian, who had entered land a mile east of the farm upon which Mrs. George  Berrian now resides. Taking up his abode thereon he continued its cultivation until his death, which occurred when he was seventy years of age, while his wife reached the age of seventy-seven years. He was a whig in his political views and was one of the worthy pioneer residents of the county, advocating and supporting all progressive measures which promoted the early and substantial development of the county.

George W. Berrian was ten years of age when his parents came to Illinois and was educated and reared in this county. His father purchased the present Berrian farm soon after their arrival and George Berrian resided thereon until his death. In his youth he worked in the fields through the summer months and in the winter season pursued his education in the public schools, and later his undivided attention was given to the farm work, which he continued to carry on with
unremitting energy until his death.

Mr. Berrian was married to Miss Elizabeth Anderson, who was born in Pennsylvania in 1827 and came to Adams county with her brother John K. Anderson, 1848. She is still living upon the old homestead, to which her husband took her as a bride and on which she spent her  entire married life. Their children are: Mrs. Sophia Hunsaker;  Ella, the wife of Charles Hirth; Walter E., who has purchased and operates the home farm; Theodore; Etta; William and George.

Mr. Berrian died at the comparatively early age of forty-four years.  He was a republican in politics and his fellow citizens called him to a number of township offices, the duties of which he discharged with promptness and fidelity. In his business affairs he prospered, becoming the owner of a valuable farm of one hundred and twelve acres seven miles northeast of the courthouse of Quincy, on which he placed excellent improvements. He worked earnestly and persistently in order to provide well for his family for his interested centered in his home.