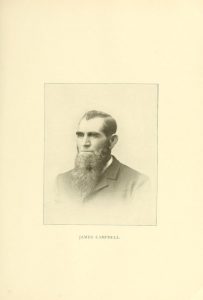 James Campbell is the oldest resident of Clayton township.  Living a retired life in the village of Clayton, he is now enjoying the rest which has come to him as the result of his activity and energy in former years.  For over more than six decades he was one of the enterprising and successful farmers of the county.  Few of the residents of this part of the state have so long resided here and his mind bears many pictures of pioneer times and also forms a connecting link with the present.  He became a resident of Illinois in 1830, being here at the time of the deep fall of snow in the winter of 1830-31.  He is, therefore, numbered among those known as the “snow birds.”  It was a winter never to be forgotten by any who experienced it, the snow being several feet deep upon the ground for a number of months, so that it was impossible for the settlers to leave their homes.

Mr. Campbell is a native of Kentucky, his birth having occurred in Muhlenburg county, June 16, 1826.  His father, Captain David M. Campbell, was also a native of Kentucky, born in Madison county in 1794.  The grandfather, James Campbell, was of Scottish ancestry and served as a member of the Continental army during the Revolutionary war and afterward became one of the early residents of Kentucky.  Captain David Campbell was reared in the state of his nativity and married there to Miss Jane Campbell, who, though of the same name, belonged to an entirely different family.  Captain Campbell was a carpenter by trade and followed that pursuit in Kentucky.  While living there he won his title by commanding a company of the state militia, his commission being signed by the governor about 1819.  In 1830 he came to Illinois, settling first in Brown county, but in the spring of 1831 he removed to Adams county and opened up a farm.  He also conducted a tavern or wayside inn on the old stage road from Quincy to Rushville, Illinois.  He afterward built and conducted the first hotel in Clayton, remained its proprietor for five years, when he sold out and returned to the farm, continuing its cultivation for some time.  In the fall of 1860 he removed to Kansas, locating on a farm in Linn county, where he spent his remaining days, his death occurred in 1882 when he had reached the advanced age of nearly eighty-eight years.  In his family were five sons and a daughter, all of whom reached adult age.  Two sons and a daughter are now living, a brother of our subject being Hon. Charles Campbell of Linn county, Kansas, who follows farming and stock raising there and is one of the prominent and influential men of that locality.  A sister, Margaret A., is the wife of W. H. Fish, of Spokane, Washington.

James Campbell was brought to Illinois when a little lad of four years and was reared to manhood in Adams county.  He is now the oldest living resident of Clayton township and in the early days he shared with the family in all of the hardships and trials which came to the pioneer settlers.  His educational advantages were extremely limited owing to the new condition of the country, for the public school system had not been perfected at that time.  He is almost entirely self-educated but through experience, observation and reading he gained  a good practical knowledge which enabled him to conduct his farming interests with success.  He continued to assist in the development and cultivation of the home farm up to the time of his marriage. 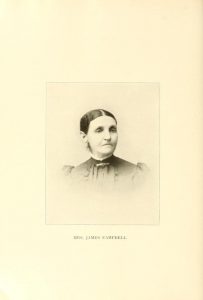 On the 18th of June, 1849, in Brown county, Illinois, Mr. Campbell wedded Miss Elizabeth Ann Bradney, who was born in Adams county, Ohio, a daughter of Thomas J. Bradney, who was also a native of that state and was there married to Miss Barbara Morris.  Mr. Bradney came to Illinois in 1842, settling in the southern part of the state where his daughter attended a school in which the mother of W. J. Bryan was also a student, her name being Lizzie Jennings.  Mr. Bradney afterward removed to Brown county.

Following their marriage, Mr. and Mrs. Campbell located in Adams county, where he carried on agricultural pursuits until 1850, when in company with his brother he went overland to California, spending two years and two months on the Pacific coast.  There he carried on farming and merchandising in connection with his brother and also operated a threshing machine for one season.  He assisted in the building of the first Methodist Episcopal church in San Jose, California.  He returned by way of the Isthmus of Panama to New York city, thence by Niagara Falls and Buffalo and on to Chicago.  On again reaching Adams county he bought a farm two and half miles north of Clayton, comprising one hundred and sixty acres of raw land, which he cleared and improved.  He afterward bought more land and now has three hundred and fifty acres in the home place.  He erected a large two-story residence, also built a good barn and other outbuildings and through his improvement developed a valuable property.  He also bought land in Shelby county, Missouri, having three hundred and forty acres at Honeywell.  He has thus made judicious investments in property which returned him a good income.  He commenced life at the lowest round of the ladder but has gradually climbed upward.  He is today one of the substantial citizens of Clayton township, having a competence that supplies him with all of the comforts and many of the luxuries of life.  In Clayton he owns a good home in addition to his farming property and he took up his abode there in April, 1900.

Unto Mr. and Mrs. Campbell have been born eleven children of whom eight are living:  John S., a businessman of Wichita, Kansas;   T. A., who is living on a farm in Shelby county, Missouri;  Julia A., the wife of John M. Garner, of Bowen, Illinois;  George A., a resident farmer of Clayton township;  Allen, who also follows farming in that township;  Ella, the wife of Samuel H. Wallace, of Denver, Colorado;  Minnie, the wife of J. H. Smith, a farmer of Clayton township;  Charles Ora, who is living on the old homestead.  Three children have passed away:  Henry B. married and at his death left six children;  James E. married and died at the age of thirty-six years but left no children;  and one died in infancy.

In early life Mr. Campbell gave his political support to the whig party and on its dissolution he joined the ranks of the new republican party, of which he has since been a staunch advocate. For twenty-five years he served as member of the school board and the cause of education finds in him a warm and helpful friend, but otherwise he has neither held nor desired office.  He and his wife are members of the Methodist Episcopal church and he was a member of the building committee at the time of the erection of Grace Methodist church in Clayton.  He has long served as one of its officers and at all times has been helpful in its upbuilding and in the extension of its influence.  For seventy-four years he has lived in Adams county and has helped to improve it and make it what it is today.  He is indeed one of the honored pioneers of the county who assisted in breaking the virgin soil, in planting the first crops and in carrying forward the work of early development.  He may indeed  be numbered among those who have laid broad and deep the foundation for the present prosperity of the county.  His entire life has been in harmony with manly principles, actuated by honorable purpose and characterized by fair dealing with his fellowmen.  He is today one of the most respected and worthy of the pioneer settlers of Adams county.