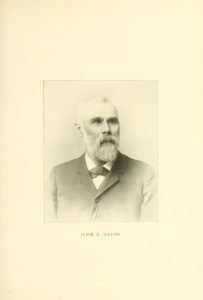 Jesse E. Weems, dealer in ice, coal and wood in Quincy, was born in Prince William county, Virginia, August 21, 1831, a son of Jesse E. and Nancy (Otis) Weems.  The Weems family is of Scotch descent, and the grandfather, the Rev. Mason L. Weems, was one of the early friends of George Washington and was the rector of the Episcopal church which Washington attended.  He was the author of the first “Life of Washington,” and first told the story of the cherry tree.  His son Jesse also became a minister of the gospel.  The mother of our subject, a native of England, was brought to this country during her infancy.

Jesse E. Weems of this review pursued his education in the schools of Virginia and also of Baltimore, Maryland, continuing his education until about sixteen years of age.  After putting aside his textbooks he worked upon his father’s farm until nineteen years of age when he joined a government surveying expedition, engaged in making the survey of the boundary line between the United States and Mexico in 1850.  He later spent some time in Washington, D.C., and in 1853 came to Quincy.  That year he had charge of a division of the survey for the Northern Cross Railroad, The line extending from Quincy to Galesburg and now forming a part of the Chicago, Burlington and Quincy Railroad.  He made the original survey with headquarters at Augusta, Illinois, and was thus engaged from 1853 until 1855, when he abandoned surveying and turned his attention to farming at Augusta.  He also operated a sawmill there and continued to reside at Augusta until 1859, when he removed to Carthage and served as deputy county surveyor of Hancock county for two years.  He was next employed as a surveyor and built the branch of the Wabash Railroad from Clayton to Carthage, this occupying his time from 1861 until 1865.  The road was then consolidated with the Wabash, and from 1866 until 1869 he was conductor on the Keokuk branch.  He then went upon the main line, running between Quincy and Danville, Illinois, until 1892.

In the latter year he went to Texas and operated an ice plant at Long View, but in 1894 sold out and organized the Purity Ice Company at Quincy, doing business at 1500 Front street, where they have a factory with a capacity of forty tons in twenty-four hours.  In connection with this plant they conduct a cold storage, handling the goods of other houses, and they also deal in coal and wood, having a coal yard at Fourth and Delaware streets, while the main office is at 718 Jersey street.  Mr. Weems is manager of the business, which under his capable guidance has enjoyed a period of constant expansion and is now one of the leading manufacturing and commercial enterprises of the city.

Mr. Weems was married in Augusta, Illinois, in 1856, to Miss Louisa Kimball, a daughter of the Rev. Milton Kimball, the first minister of the Presbyterian church of that place, now deceased.  Mr. and Mrs. Weems had four children, but the eldest and the youngest are deceased.  The others are Milton K. and Frank H., proprietors of Weems Laundry of this city.  The wife and mother died in 1876, and in 1884 Jesse E. Weems married Mrs. Brawner, who is still living.

He belongs to the Masonic fraternity and the Odd Fellows’ Lodge, but is not active therein.  He holds membership in the Congregational church.  More than half a century has passed since he first came to Quincy and he has delighted in the changes which have since occurred, making substantial improvements and progress in the city.  As a railroad builder he was a promoter of the development of this part of the state and is now an active factor in the industrial and commercial interests of the city, upon which the development of every community depends.