Josiah J. Perry, a contractor in plastering in Quincy, with a large and growing business, was born in this city, on Broadway, June 29, 1843.  His father, Joshua Perry, a native of England, was born August 8, 1809, and in early life learned the trade of plastering.  He came to the United States when twenty-two years of age, believing that he might have better business opportunities in the new world, and on the 1st of May, 1836, he came to Quincy, being induced to take this step by Governor John Wood, for whom he worked for a time.  Later he was employed as a journeyman plasterer and subsequently he engaged in business on his own account as a contractor in that line, and as the population of the city increased rapidly his trade grew in corresponding proportions.  He worked on the old courthouse and also on the First Baptist church on Fourth and Jersey streets.  He followed his trade until 1850, when he retired from active business life to enjoy the rest which he had truly earned and richly merited.  He was two weeks over eighty years of age at the time of his death.  His political allegiance was given the republican party but he was never an office seeker.  Before leaving England he was married to Miss Susan Brown, a native of that country, and unto them were born  ten children, of whom six are now living:  Eunice, of Quincy;  Martha;  Josiah J.; Stephen; Isiah; and Cornelius, of Normal, Illinois.

Josiah J. Perry pursued his education in the public schools of Quincy and under his father’s direction learned the plasterer’s trade.  For forty-four years he has been engaged in business in Quincy and has long commanded a liberal patronage, securing a large trade because of his faithfulness and promptness in executing the terms of a contract.  He is a member of the firm of Perry, Tenk & Company.

Mr. Perry has been married twice.  He first wedded Nannie Roberts, who died leaving three children:  Isaac, Oscar and Frank.  In 1884 he was united in marriage to Miss Lizzie Knorr, and they have two daughters and a son, Lillian, Edgar and Viola.  The family home is at No. 2975 Hampshire street.

Mr. Perry is a republican in his political views, but has never been an office seeker, preferring to give his undivided attention to his business interests, in which he has met with gratifying success, because of his excellent work and reliable business methods.  A pleasant manner and many sterling traits of character have also made him popular with the business community and his many social acquaintances and he therefore has a large circle of friends in the city in which his entire life has been passed. 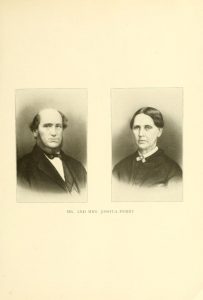 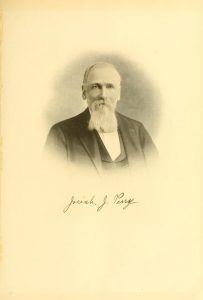