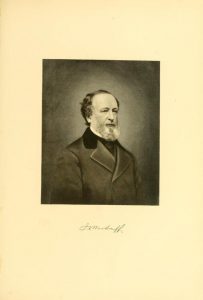 Isaac Ogden Woodruff, deceased, became a resident of Quincy when it was a village of small proportions but large possibilities, and in its growth and development he became a factor, eventually controlling important and extensive business enterprises and also taking an active part in municipal affairs.  He was born in New York city, May 15, 1813, and was a son of Thomas Tyson and Mary (Ennis) Woodruff, both of whom were natives of the east.  The father eventually settled in New York city, where he engaged in the real estate business during the latter part of the eighteenth and early part of the nineteenth centuries.  The size and development of the city at that time may be imagined from the fact that his home was located on Tenth street and Fifth avenue.  His last years were spent in retirement from active business pursuits and both he and his wife died in New York city.

Isaac O. Woodruff attended the public schools of New York and acquired a goodfoundation knowledge on which to build a successful business career.  He was twenty-one years of age when, in New York city, August 22, 1836, he was married to Miss Arethusa H. Dewey, a native of Albany, New York, born December 8, 1814.  She was descended from old Revolutionary stock and was a daughter of Timothy Dewey, who was a pioneer of New England.  To the same family Admiral Dewey belongs.  Mr. Woodruff had a brother living in St. Louis, Missouri, and because of this, he and his bride made their wedding journey in 1836 to that city, but remained there for only a brief period.  They then came to Quincy, which had not then emerged from its village-hood, but which was advantageously located, and, because of the growth of the west, seemed to promise good advantages.  Mr. Woodruff opened a small store and began general merchandising, which he followed for a few years and then turned his attention to the life insurance business.  He prospered in that undertaking and later embarked in the banking business, opening a small private bank, which he conducted successfully for several years.  He was also one of the stockholders in the old Flagg and Savage Savings Bank of Quincy, with which he was connected until its failure.  Later he lived retired from active management of business enterprises, but was financially interested in many business concerns of importance to the city as well as to the individual stockholders. 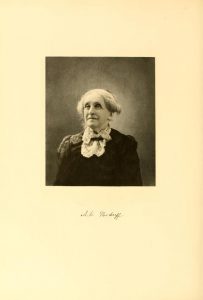 Unto Mr. and Mrs. Woodruff were born seven children, four sons and three daughters, as follows:  Thomas T., who married Sylvia Ingersoll, now deceased, is living a retired life in La Junta, Colorado;  Josephine, deceased, was the wife of A. E. Wheat, a prominent attorney of Quincy;  Timothy Dewey, who married Frances E. Godfrey, resides in Quincy;  Helena became the wife of Thomas Leeming, but both have passed away;  Isaac O., who married Charlotte Colburn and after her death wedded Mrs. Mary Higbee, is now living in New York city, where he is engaged in dealing in physicians’ supplies;  James E., who married Bertha Castleberry of Chicago, is engaged in dealing in oranges at Redlands, California, and Theresa Dewey occupies the old family home in Quincy.

Mr. Woodruff died July 16, 1870, and his wife’s death occurred June 16, 1904.  Not only had he been active and enterprising in business affairs, but was also influential in molding the policy of the city and his fellow townsmen gave him a public recognition of their belief in his ability trustworthiness by electing him to the office of mayor and city treasurer.  He served for one term in each, and he was also treasurer of the old Quincy city library and the Quincy & Toledo Railroad.  He was a staunch democrat in politics, unfaltering in support of his principles, and was one of the early members of the Odd Fellows lodge in Quincy, joining Quincy Lodge No. 12, March 9, 1850.  He was a regular attendant at and liberal supporter of St. John’s Protestant Episcopal church, of which he was a charter member, and his wife was also a member from the time of its building until her death.  Mr. Woodruff had a wide acquaintance among the early settlers of Quincy, enjoyed the warm friendship of many and the respect of all.  Many were they to whom he gave substantial assistance.  In 1868 he erected a commodious and beautiful residence at No. 1437 Maine street, but lived to enjoy his new home for only a year.  During that time a slight stroke of paralysis enfeebled his constitution and the following summer attack of cholera morbus caused his death after an illness of five days.  His widow there remained until her death, dispensing a warm hearted hospitality , and their daughter, Miss Theresa D. Woodruff, still occupies the old home.  Like her father, she is deeply interested in Adams county and in many worthy movements here, and the circle of her friends is very extensive in the city which has always been her home.