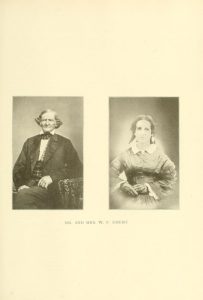 Walter F. Emery, deceased, was one of the pioneer settlers and representative citizens of Adams county, and man who to know was to respect and honor, for in all life’s relations he was true to the trust reposed in him and met his obligations with conscientious fidelity.  He was born in Vermont in 1828, and was reared to farm life.  He came to Adams county in 1832 and remained here until the spring of 1850, when, attracted by the discovery of gold in California, he crossed the plains, making the long and arduous trip the hot, sandy stretches and through the mountain passes.  He hoped that he might readily acquire wealth in the gold fields, and for three years engaged in mining, but, like many others, he did not realize a fortune, and returned to Illinois by way of the Isthmus of Panama.  He had settled upon his farm in this county in 1835, entering one hundred and sixty acres of land from the government, for which he paid the usual price of one dollar and a quarter per acre.  He broke the land with ox teams and erected a double log cabin.  The farm is situated in Melrose township at what is now Twenty-fourth and State streets.  The latter street, beyond Twenty-fourth street, was cut through his farm and he donated the land to the county.  He experienced all the hardships and trials of pioneer life, assisted materially in the development of the county when it was still a frontier settlement.  During the early days he broke land with oxen for E. H. Buckley on Broadway between Twentieth and Twenty-second street in Quincy, the land at that time being covered with hazel brush.  In addition to his farm in Melrose township he became the owner of four hundred acres of land in Columbus township and a tract of one hundred acres of timber land.  He also owned the site of the Woodland cemetery and sold this to Governor Wood for ten dollars an acre..

Mr. Emery was united in marriage to Miss Matilda Goodrich, who was born in the state ofNew York and was a niece of Governor John Wood, with whom she drove to Illinois in a buggy at a very early day.  They became the parents of eight children, of whom four are now living;  Emily A. resides on the home farm, of which she owns forty-nine acres, including the Quincy golf links.  John F. married Mary Howard, by whom he has two children, Laura B. and Lulu P., and owns forty-six acres of the old home farm, on which he is engaged in gardening.  James L. was educated in the Madison public schools and resides on the home farm, where he has twenty-two acres valued at one hundred and seventy-five dollars per acre.  He married Ella Heffelmann, who is now deceased.  Mrs. Charlotte Smith, of Maine, was the youngest of the family, and is now deceased.

Walter F. Emery was a whig in his political views in early life and gave his support to that party until its dissolution, when he joined the new republican party and continued one of its stalwart  advocates until his death.  He held a number of township offices and was always faithful to the trust reposed in him.  He died at the age of seventy-eight years, and his wife passed away at the age of seventy-three years.  Both were held in high esteem, for they displayed many excellent traits of character.

Mr. Emery was particularly helpful during the epoch of pioneer development in Adams county.  He favored every movement or measure that tended to promote public progress, and his efforts were of particular benefit in the line of agricultural development.  In early days he was known as the champion cradler of the county, being able to cradle four acres of land per day, which was considered a remarkable feat at that time.  All who knew him respected him, and he well deserves mention among the early pioneer settlers.