Phillip Amen was born near Baden Baden in the Grand Duchy of Hessen in 1776. He was a German lutheran and married a girl named Mary. On 15 Sep 1808, they had a son named Phillip. In 1830, he married Lana Hagen, born 21 April 1809 in Hessen. She was Roman Catholic but later converted to her husbands religion.They had four children in Germany who came to America with them in 1834. They were George, Issac, and Mary Amen.

After six weeks at sea, they landed at New Orleans, and the family came up the Mississippi River to Quincy. They then moved to McKee township in the eastern part of the county because there was plenty of timber, and Phillip was a wagonmaker.

The Amens had 7 more children – Henry (1840), Francis (1842), John (1846), Katherine (1849), Joseph (1851), Elizabeth (1839), Melvina (?). For those interested, I have histories on most of these children. In 1849, Phillip Amen sent for his father and mother to join them. After landing in New Orleans, the older Phillip Amen died of cholera, and his wife Mary came on up the river. In the early 1880s, Phillip and Lana left their farm and moved into Kellerville. Lana died on August 8, 1885 and Phillip passed away on Dec 9, 1886. One of the children, Katherine, was my great grandmother, and she married Thomas Jefferson Humphrey in 1867. They had five children born in Adams County, but moved on to Lamar County Texas, and then to Oklahoma. 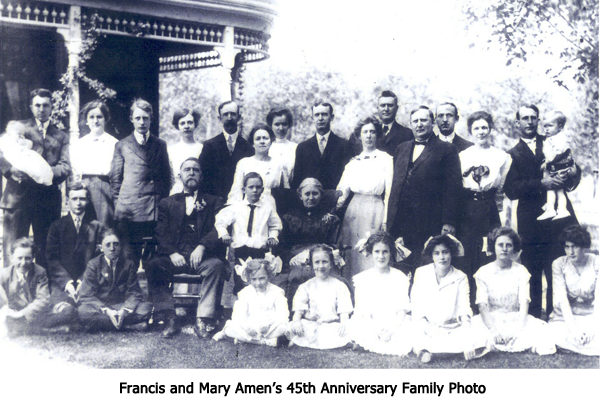