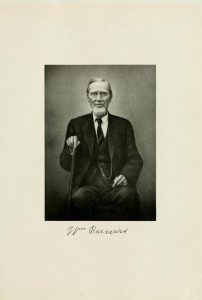 WILLIAM HENRY BARNARD. For nearly fourscore years the interests and associations of the Barnard family have been with Pleasant View locality Section 23, in Liberty Township, formerly known as Barnard Post-office, two and a half miles east of Liberty village. The Barnards are a family whose history will be read with interest and instruction. Each generation has fulfilled its part in the work and citizenship of the community. In some respects there has been a steady progress, so that each successive generation has been a little better off and a little better able to render service to themselves and to the community than the one preceding. In many families unfortunately the reverse is true.

William Henry Barnard represents the third generation in Adams County, and his son, now a prominent railway official, is of the fourth generation.

The family history may properly begin with the name Jason Barnard, a native of Virginia. He married Jency Carter. They lived for some years near Lexington, Kentucky, where William Barnard was born December 18, 1925. In 1831, when William was six years old, the family came west by the familiar means of transportation then available, horses and wagons, and settled in Rails County, Missouri. Marion, a brother of William, was carried all the way by his mother on horseback. The family lived in Missouri until the fall of 1942. when Jason Barnard secured a tract of land now contained in the Barnard homestead in Liberty Township. William was then a boy of seventeen, and he always remembered one part of the preliminary work done on the land, the digging of a well. Of Jason’s brother one, Jonathan, remained in Missouri, another, Thomas, moved to Iowa, and still another, Calvin, lived in Indiana. Jason spent the rest of his days on the old farm in Liberty Township and died there in 1879, in his eighty-fourth year. His wife died in 1866, at the age of sixty-eight. The land of the original home was originally prairie, and all the buildings first put there are now gone. William had constructed a small home for his father’s comfort in old age, and that house is still in use as an outside apartment. Jason’s children were: Guilford, who went to Oregon at the age of twenty five and died age eight-two; Emily, who died a young woman; Nancy spent most of her life in Adams County, married Wallace Shohoney and died when past eighty years; William; Marion, who served in the Civil war and died in Adams County November 14, 1916, at the age of eighty-six; Fanny who married Andrew Casey and died in young womanhood; Eliza, who married Anson Welte, and died when past sixty; Calvin,, who was a Union soldier and gave his life as a sacrifice to his country during the war; and Maria, who married Martin McRae and went to Kansas, where she died at a ripe old age.

William Barnard, of the second generation in Adams County, grew up at a time and in the environment which almost precluded his gaining an education. the fact is that when he married he was unable to write his name, and his wife laboriously taught him the art of writing. Later, my much application, he became well informed, and was a highly intelligent and useful citizen. He married November 2, 1845 Elizabeth Pearce, who was born in Tennessee November 16, 1824, daughter of Joshua and Sarah Pearce, who came from Tennessee prior to 1842 and settled in Liberty Township. After his marriage William Barnard settled on land owned by his father, most of it in the timber, and he had to cut away the trees and grub out the stumps to make available for crops. In course of time he had a good farm. In 1877 he returned to the old homestead to care for his father. At that time he opened a stock of general merchandise and also began the construction of the present home on the farm. Two years later the merchandise was established in a store building of its own near the house. In 1894 the original building was struck by lightning and burned, entailing a loss of all the stock. On June 22, 1882, William Barnard was commissioned postmaster at Barnard, his commission being signed by the then postmaster general, Timothy Howe. Barnard Post-office continued on the official list of post offices and also as a community center until the service was supplanted by the rural free delivery in 1904. In 1902 William gave up his office and was succeeded by his son William H., who was postmaster until free delivery started. After the store was struck by lightning it was rebuilt, but was located on a corner a few rods distant from the old site. When the post-office was discontinued the stock and merchandise was sold. After leaving the post-office Willaim Barnard lived quietly retired. He was a republican practically all his life. He was reared a democrat, but was so impressed by observation of events at a democratic barbecue when he was young that he changed his party. He was one of the original members of the Pleasant View Baptist Church, situated a half mile from his home, and was a trustee of the church the rest of his life. He grew up in a pioneer time when every boy was supposed to know how to handle a gun. He became a fine marksman, and in early years killed many deer, and kept up his practice with the rifle until failing eyesight and old age compelled him to desist. His wife died in 1895 and he died January 16, 1917, in his ninety-second year.

The children of William Barnard and wife were: Amelia, unmarried and still at the old home; Philip, who died at the age of six years; William H.; Charles W., in business at Liberty Village; Oliver G., formerly a merchant, and now owner of the waterworks plant at Orient in the State of Washington; and Marie, who died in 1885 aged twenty-nine years.

William Henry Barnard was born on the old farm March 18, 1855. He made the most of his limited advantages in school, has always keenly realized the value of a good education, and his liberal assistance to his son to realize the best possible training has been well rewarded by the latter’s career. William H. Barnard has spent all his life on the old home farm, has superintended its cultivation, and managed both his father’s and his grandfather’s places. His residence is on a tract of land which has been in the family possession now for seventy-seven years.

March 2, 1880, Mr. Barnard married Miss Mary Miller, who was born in the same community March 22, 1858, a daughter of Fred Miller, one of the prominent old residents of Liberty Township. The old Fred Miller home is now owned by Mrs. Barnard and the other heirs.

William Frederick Barnard, only son and child of Mr. and Mrs. William Henry Barnard, was born September 21, 1883. He was given all the advantages at home and in local schools and at the age of nineteen took a course in the Gem City Business College, graduation in 1904. Soon afterward he was employed as a clerk in the offices of the Wabash Railroad at Springfield in the maintenance of way department. Five months later he was promoted to the division point of that road at Decatur, and was soon chief clerk to the chief engineer. In 1915, when the general offices of the road were moved to St. Louis, Chief engineer R. O. Howard called him to that point as his chief clerk, with corresponding increase of responsibility and salary. Then, with the new management of railroads under government supervision, Director General McAdoo appointed Mr. Barnard superintendent of insurance for the Wabash Railroad, his appointment taking effect October 15, 1918. His offices are in the Railway Exchange Building at St. Louis. At the age of thirty-five, therefore, he has risen to one of the important responsible positions in the great railway industry of the country. He lives in St. Louis, and has been married since December 8 1910. He married Lena Mae Keon, who was born near Pattonsburg, Missouri.