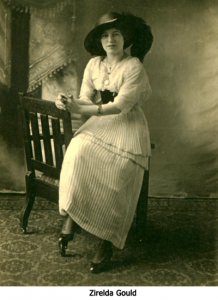 This photo is of Zirelda Gould who was born in Quincy, Illinois in June of 1895. She was the daughter of David Tomilson Gould and Lydia Meyer. She died June 2, 1915. Her brother, David Gould, said she committed suicide by jumping off a bridge. She was a beautiful young lady and engaged to be married. It seems she was in a motor accident and was disfigured and her fiance’ broke off the engagement. And so they say, she committed suicide. She is buried in Greenmount Cemetery with her maternal grandparents, Conrad and Mary Meyer, and an aunt who helped raise her, Katherine Meyer and her husband Clyde Cason. She had been living in Kansas City, Missouri with her aunt Kate and it is unknown if she committed suicide in Kansas City or Illinois.