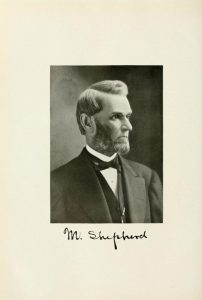 MAXIMILIAN SHEPHERD, M.D., December 28, 1814-March 8, 1880. A distinct type of that old time character “the Country Doctor,” whose arduous life of kindly service has furnished theme for verse and story, was Dr. M. Shepherd of Payson, Illinois.

Doctor Shepherd was of Virginia descent. His parents, Richard and Elizabeth Wingfield Shepherd, were natives of Culpeper County in that state. Most of their married life was spent in Iredell County, North Carolina. Mr. Richard Shepherd died in Asheville leaving his widow and four children, Thomas Jefferson, Henry Milton, Caroline and Maximilian. Throughout all the years spent on the western prairies Doctor Shepherd treasured his memories of the picturesque scenery of the Blue Ridge around his childhood home. Mrs. Elizabeth Shepherd married the second time. The family joined a company of neighbors in emigrating to seek new homes in the western country. After crossing the Allegheny Mountains the party divided, some going to Kentucky, others to Indiana and Illinois. The names of Wingfield, Stephenson, Nichols, Ewing and Shepherd were familiar in pioneer times and have been honorably maintained to the present day.

Doctor Shepherd’s youth was spent in Putnam County, Indiana. At the age of sixteen he began his own support. His industry and economy enabled him to enter the Indiana Asbury University at Greencastle, which was under the management of the Rev. Matthew Simpson, who became a noted bishop in the Methodist Episcopal Church. The institution is now known as De Pauw University. It was there Doctor Shepherd developed the love of choice literature which became an enjoyment and a solace in his future life. At the age of twenty-one he began the study of medicine with Dr. William L. Mahan of Pleasant Garden, Indiana. His reading was continued with Doctors Talbot and Cowgill of Greencastle and he commenced his practice in Pleasant Garden in 1838. In 1840 he removed to Payson, Illinois and there undertook his chosen life work so faithfully continued for forty years, a work well done, well remembered, well revered.

Few people living now, realize the hardships, self denial, discouragement’s and obstacles endured by the pioneer physicians in the Prairie State. Visits were made mostly on horseback, as rough roads, unfrequented by-ways, obscure bridle paths or making a new course through the unbroken prairies and fording streams of uncertain depth made travel difficult and dangerous.

Very few also realize the watchful preparedness of the pioneer physician who must supply his own remedies and compound his own prescriptions. To do this involved the continual replenishing of a miniature apothecary shop carried in saddle bags especially constructed for such purpose. For the mysterious depths of the aromatic caverns the doctor drew forth pills and powders, syrups and tinctures, extracts and oils, lotions and liniments, ointments and plasters. One compartment contained a tourniquet, bandages and a small leather case of surgical instruments.

Dr. Shepherd soon became a partner of Dr. David Prince, the first physician who practiced in Payson, having come there with his parents from Brooklyn, Connecticut. After a time Doctor Prince went to Cincinnati for medical lectures and then settled in Jacksonville, where he became one of the prominent surgeons of Illinois.

Doctor Shepherd formed another partnership with Dr. William Chittenden Harrington, a newly arrived physician from Watertown, New York. The names of these two physicians were household words in a wide range of territory, as their practice extended to Liberty, Burton, Newtown, Kinderhook and Millville, now called Marblehead. Their nearest professional neighbors were in Columbus, Barry and Quincy. Neither Doctor Harrington nor Doctor Shepherd made any claim to surgery, aside from minor cases. For major operations they depended upon Dr. Daniel Stahl of Quincy or Dr. David Prince of Jacksonville. In 1844 Doctor Shepherd spent the winter attending lectures at the Louisville Medical Institute and was graduated in 1845. The college faculty contained men of much celebrity, including Dr. Daniel Drake, afterward of Cincinnati Medical College and Dr. Samuel Gross, later the eminent surgeon of Jefferson Medical College, Philadelphia.

The increasing population and prosperity of Payson attracted a number of professional men to the place. Dr. Moses M. Bane came from Athens, Ohio, in 1849; Dr. Samuel Sturgis, the first dentist who practiced in Payson came from Chester County, Pennsylvania, in 1852; Dr. Moses F. Bassett from Worchester, Massachusetts, in 1853; Dr. Henry W. Kendall from Cincinnati in 1856.

At the outbreak of the Civil war, Doctor Bane became colonel of the Fiftieth Regiment of Illinois Volunteers and Doctor Kendall surgeon of that regiment. The intimate acquaintance and warm friendship of these two gentlemen for Doctor Shepherd continued throughout life.

On first coming to Illinois Doctor Shepherd united with the Presbyterian Church of Newtown; in 1852 he transferred his membership to the Congregational Church of Payson where he was an influential and generous member.

In early years he was a staunch democrat but joined the republican party at the time of its formation and gave it always his loyal support.

In 1843 Doctor Shepherd was married to Miss Mary Ann, eldest daughter of Col. John Gill and Mary Vickers Humphrey, who came with her parents from Leesburg, Virginia, to Burton Township in 1836. Mrs. Shepherd was a lady of unusual beauty and grace beloved by all who knew her. The only son, John Humphrey, died in 1848. The following year Mrs. Shepherd was a victim of acute tuberculosis and died September 28, 1849. She entrusted the little daughter, Anna, to her father’s home and care. Never was trust more faithfully fulfilled. Neither cares nor fatigue prevented the father’s watchful oversight of the physical welfare and mental growth of his delicate child.

From the strict training given in the Payson academies by the Rev. Joseph O. Metcalf and the Rev. William M. Corbin, Miss Shepherd was well prepared for the opportunities afforded Brooklyn Heights Seminary, conducted by Dr. Charles E. West and Miss Mary A. Bringham, afterward president of Mount Holyoke College. Following her graduation Miss Shepherd taught in Brooklyn Heights Seminary until her marriage to Dr. Reuben Woods of Chicago. In 1870 Doctor and Mrs. Woods came to Payson where Doctor Woods was associated with his father-in-law and continued in practice for six years. A change of climate seemed essential for health and Doctor and Mrs. Woods went to Oakland, California, with the promise that Doctor Shepherd would soon follow them to the Pacific Coast. Business complications and close associations combined to retain him in the old home. A life of leisure ceased to appeal to him and he often expressed a wish “to die in the harness.” The wish was granted. Despite the entreaties of the household and of the neighbors he insisted on riding through a raging storm to Bluff Hall where a patient was critically ill. To all remonstrance’s he answered in his firm, quiet way, “the man has put his life in all my care. I must not fail him.” The exposure resulted in a brief fatal illness. On the eighth of March, 1880, the second physician who came to Payson, the senior physician of Adams County, ended his consecrated service of forty years.

Greater love has no man than this, that he lay down his life for his friends. Seldom does the sense of sorrow so pervade an entire community as when the announcement of his death was made known. Sadly and gratefully was recalled what he had done, what he had stood for, what he was. There was bereavement not only for the trusted physician but also for the giving up of the devoted family friend. There were vivid memories of the low, mellow voice as it spoke words of kindly cheer, of wise counsel, of fatherly comfort. There were sacred memories of hours when the tender clasp of his gentle hand conveyed a heartfelt sympathy which no words could express.

“Honour a physician according to thy need of him with the honours due unto him.”

“For verily the Lord hath created him, – and from him is peace upon the face of the earth.”