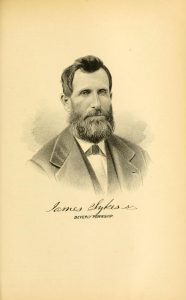 Physician; P.O. Beverly; was born in Adams county, Ill., May 22, 1844.  After four years’ study of medicine, the last year being employed as dresser in a military hospital, he graduated at the College of Physicians and Surgeons at Keokuk, Iowa, May 21, 1864, being then but twenty years of age; was immediately commissioned Surgeon in the army of the Cumberland.  After serving two years in the south, was transferred to Custer’s Cavalry, and served one year in the campaign against the Indians on the plains, and was finally mustered out at Fort Dodge, on the Arkansas river, March 1, 1868.  Returning to Beverly, he located there, and has attained a large and lucrative practice; was married to Miss Helen H. Godfrey in 1872.  They have four children: Mary F., Eliza, Howard J., and Helen.

farmer; Sec. 28; P.O. Beverly; was born in England, in 1817; came to Adams county, Ill., from New York with his parents in 1834.  Married Eliza G. Raymond, in 1840; have three children, William R., James and John G.  Has served as Justice of the Peace for twenty-three years, and been Township Treasurer for nearly thirty years.