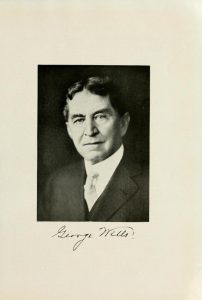 GEORGE WELLS, long prominent in financial and business affairs at Quincy, and associated with Major James Adams as mortgage bankers, is the oldest living child of the late Edward Wells.

He was born August 22, 1846, at Quincy, on the site of the present armory. He attended private schools in his native town to the age of thirteen, and was then put in school at Kingston, Massachusetts. He has always led a very active life and though now past the ate of three score and ten has every appearance of the man of fifty. At the age of sixteen he entered his father’s pork packing establishment and remained in that line of business until 1879. Form 1869 to 1876, during the summer months he also manufactured canned goods and pickles. From 1880 to 1886 Mr. Wells was in the grocery business, but in the latter year formed his partnership with Major Adams under the name of Wells & Adams, mortgage bankers. About 1860 his father bought the present Wells Building, which was erected in 1856 at the corner of Main and Fifth streets. This building was subsequently remodeled by George Wells, and it is now his office headquarters.

Mr. Wells inherits his father’s interest in the republican party as well as his aversion to holding political office. He is one of the prominent Masons of the city, serving as Master of Quincy Lodge, Ancient Free and Accepted Masons, in 1888-89, and for a number of years was eminent commander of El Aksa Commandry of Knights Templar. He has also served as a trustee of the Anna Brown Home for the Aged and is a trustee and official for the Woodland Home for the Friendless and Orphans. In 1909 Mr. Wells built a beautiful home on Twentieth Street, where he has a spacious house surrounded by ample grounds, on of the homes that give dignity to a beautiful residential section. Mr. Wells and all his family are members of the Unitarian Church.

August 29, 1869, at New York, George Wells married Sarah Jane Castle, only daughter of Dr. Edward G. Castle of Quincy. Doctor Castle and wife were both born at Carlisle, England, and came to Quincy in 1849. Doctor Castle was a well educated and trained physician in English schools and institutions, and was regarded as one of the foremost physicians and surgeons of the city for many years. During the war he was busily engaged in local hospital service.

Doctor Castle died September, 1880, at the age of sixty-five. He married Jane Carrick, who survived him about ten years. She was of a fine old English family, her father, David Carrick, having been an English banker. Mr. and Mrs. George Wells had eight children, four of whom are still living. Edward Castle Wells, the oldest, born June 27, 1871, was educated in Massachusetts from the age of fourteen, graduating from the Massachusetts Institute of Technology in 1892 and receiving his degree in mechanical engineering before his twenty-first birthday. For a number of years he was connected with the firm of Wells & Adams, mortgage bankers at Quincy, but in the fall of 1913 moved to Dayton, Ohio, and has since been head of the Platt Iron Works of that city. He married, October 17, 1895, Mary Caroline Brookings, of Boston, and they have two sons and two daughters. James Russell Wells, second child of George Wells, was born September 11, 1872. His twin brother, Albert George, died in infancy. James R. Wells after his fourteenth year attended private schools in Massachusetts, graduated from Dummer academy in 1891, and studied architecture and design in the Massachusetts Institute of Technology and the Boston Art School. For about a year after completing his education he followed his profession in Boston, but has since been connected with the firm of Wells & Adams and is busied with handling his father’s varied interests. November 8, 1898, he married Henrietta Rosamond Eaton, and they have four sons and one daughter. The fourth and fifth sons of Mr. George Wells were named Willie George and Frank Harrison, and were born respectively December 4, 1873, and June 21, 1875. Both died in infancy. The sixth son was Charles Lawrence, born January 19, 1883, and elsewhere referred to in this publication. The only daughter of the family was Harriet Evans, born July 28, 1884. She had a twin brother, who lived only a few months. Harriet is now the wife of Lafayette D. Musselman of Quincy. File contributed by: Barbara Freeman October 1999