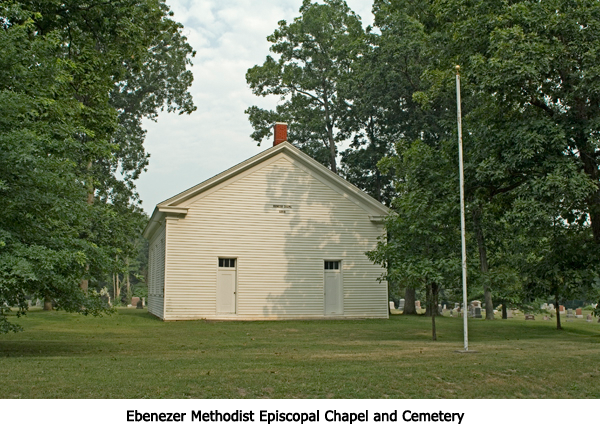 In the early fifties when those pioneers of the east began to settle in the Midwestern states, there were those who liked the looks of the fertile prairie lands and rolling hills that surrounds the present Ebenezer church.

In a few years they had laid out their farms, erected their log houses and as they had been taught that a democracy stands upon a foundation of the home, the church, and the public schools; they began looking around for a suitable place to build a church and school. In those days, there were men with a vision, who saw the future of this country as it would grow and develop, bringing forth its harvests, not only of grains and livestock, but of boys and girls, who would be the future men and women to carry on after they were gone. They built their first school house out of logs, taken from the timber in which the school house stood by the side of the road. The only things that mark the place of their endeavors today are a few bricks and rocks and a mound of earth. This place you can see, if you will go to the west side of the old cemetery almost to the north line in the edge of the woods. On the fifth day of October, 1858, George W. Foss, deputy surveyor for the county of Adams, surveyed a tract of land in section 16, belonging to William Willard, for the purpose of transferring it over to a society known as the Ebenezer Chapel Society of the Methodist Episcopal Church. This transfer did not take place until the following year on September 23, 1859. The deed was written by one Thomas Crawford, who was a justice of the peace in Houston Township. It was written with ink; not a word being printed as our deeds are today. It fills four pages of writing paper, 7X12 inches. This tract of land, which includes the churchyard and the old cemetery, was deeded to the Ebenezer Society in consideration for one dollar, with this one condition: (these are the words as they are written in the deed)___ “This conveyance however is made upon this express condition, that said Trustees, not their successors, nor any person, or persons for, and on their behalf, shall not convey, nor incumber said premises; and in case they do sell, or attempt to sell, convey, or incumber the same, or any part thereof, then in that case the whole of the premises, hereby conveyed, shall revert back to the said William Willard, his heirs, executors, administrators, or assignees; and is further conditioned that such portion of said premises, as laid out for a cemetery, shall forever be, and remain, free for any, and all who wish to bury their dead therein.”

The first trustees of the society were elected on December 10, 1858, and consisted of the following men: Martin Sherrick, John Prather, William C Stokes, Bradley Stewart, John B. Tull, John Willard, and William Prather. They were elected for a term of five years. The minutes of the meeting, together with the election of the trustees, was recorded in Quincy, Illinois.

In 1881 we find the older ones stepping aside for a younger generation. The trustees elected for that year were: John W. Sherrick, John W. Jacobs, Alvin Bennett, Thomas Prather, John McCoy and N.H. Kane. The framework of the church was made by the pioneers by the sweat of their brows and prayers, as they hewed then out of the timber which stood near by. Today the marks of their adzes, as we climb the loft to see, still remain as living testimony of the faith they had in man, in their country, and in their Creator.

As the years passed away and those who labored and toiled for the betterment of their community were laid to rest, one by one, in the cemetery which they had prepared for that purpose, it became evident that more ground would be needed to bury their dead. In the year 1893, a new society was formed, known as the Ebenezer Burial Ground Association, with John C. Pearce, John W. Suter, and F.M. Stahl as trustees. They purchased a tract of land north of the old cemetery, laid it out in lots 10 feet X 20 feet, and sold them at $7.50 per lot to anyone who wanted a place to bury their dead.

In the year 1925, by an order of the court, the management of both the old and new yards were placed under one set of trustees, consisting of three members; H.F. Willard, president, Roy L. Sharrow, secretary-treasurer, George Cook, trustee.