n the summer of 1999, my father, Jim Cox., Jr., suffered a heart attack. He was no longer able to take care of my mother who had suffered from Alzheimer’s for the last 9 years. I had to put her in a nursing home and he struggled with her loss and his imperfect health. He sheltered the TV remote and despite my best efforts, I could not get him to leave the house. One night on the telephone, he started telling me about his visit to a farm in Kansas as a little boy. Memories that probably surfaced because of his own thoughts of mortality. He talked about “Fly” the horse that ran him through a clothesline and the moon and stars watermelons that were the best tasting watermelon you would ever taste. I told him I would like to visit that farm in Kansas and asked if he would like to go. To my shock, he said yes. The next weekend, we made a day trip to Kingman, Kansas, and the farm he remembered so fondly as a little boy. Little did I know how that seed of curiosity would lead to so much family history.

In the spring of 2000, my brother found the seeds for the watermelons on the internet. A variety that had virtually disappeared and was considered extinct. For the next 4 years, my father and I planted and watched those seeds grow on his farm in Jones, OK, into many, many yellow and green spotted melons. He set up a one man concession and even had his picture in the newspaper with his “prize” watermelons. We began taking day trips all over the State of Oklahoma.

His passing in February of 2004 left me lonely and searching for anything to hold onto. So I began to research the Family Tree and I began my search with the stories he had told me about trips he made to Kentucky and the farm in Kansas with his family as a little boy.

The farm in Kansas led me to Dorothy Mann Tillery of Wichita, KS. A phone call weeks after my father’s death unveiled another woman by the name of Lucy J. Collier that lived with the Mann Family on the farm during the late 1800’s and early 1900’s. According to Dorothy, she was related to the Cox Family. From that tidbit of information, my research led me to Payson, IL and Lucretia Collier. I also had a tin photograph I found in my father’s belongings that had the name of Rachel and Pike Wilcoxen “Payson, IL.”

My next clue came from a marriage license issued in 1865 to Pike Wilcoxen and Rachel Colyer that I found on the world wide web. I wrote to the Adams County Clerk, armed with a copy of the license from the internet and Lucretia’s name and simply asked for more information. I had also found on a message board a comment that Carrie Wilcoxen was the granddaugther of Lucretia Collier. What followed was the actual probate for Lucretia Collier filed in Adams County following her death in 1884.

I was unprepared for the wealth of information that Lucretia’s probate would provide in my quest for the family tree.

This is what I found. Lucretia was born in Kentucky to Andrew and Rachel Malone Dunlap in 1814. Andrew’s father, James Carnachan Dunlap, immigrated from Ireland and fought in the Revolutionary War and lost an eye. He moved his family from Kentucky to Indiana in the early 1800’s, after Lucretia’s birth.. Lucretia had siblings named Narcissa and Ephran, among others. From her mother’s letter to Ephran in 1841 in Liberty, Adams Co., IL, which are published on the Adams Co., Gen Website, [be patient, work in process–ed.] Rachel talked about Lucretia’s recent loss of her husband James Tomlinson. She was obviously worried about Lucretia’s two small children, Emily and James Andrew.

Lucretia remarried in 1846 to Perry Collier in Adams County. She had at least four more children, Rachel, Perry A., Narcepa and Lucy J. Collier. By 1860, Lucretia was widowed for a second time. Her parents, Andrew and Rachel, along with their other children had moved to Adams County by the time of the 1850 U.S. Census. Their daughter, Narcissa married James Langsford.and Lucretia’s daughter, Rachel, married Pike Wilcoxen in 1865. Their only child, Carrie, at the time of Lucretia’s death in 1884, was living in Meade County, KY, and was married to James G. Cox. Lucretia’s daughter, Rachel and son James Andrew died sometime before 1880. Her grandchildren were among the heirs named in her probate. Her son, Perry Collier was living in Anthony, Kansas. More importantly, Lucretia’s daughter, Emily, was listed as an heir, and her husband, Abijah Mann had posted the $6,200 bond needed to probate her estate. It was the “bond” that established the connection between the Collier’s and the Mann’s for future generations.

Lucy J. Collier moved to Kingman, Ks after the death of her mother and lived with Abijah and Emily Mann until her death in 1933. She never married and always dressed in black, buying bolts of black cloth and adorning them with large white buttons and ruffles to cover her 6’1″ slender frame. She faithfully attended the First Christian Church, maintaining a permanent vigil over the same pew every Sunday, even displacing visiting dignitaries.

I’ve learned that “Fly” was brought from Temple, Tx., by “Uncle Frank” tethered to the back of a wagon as a birthday present to Emily Mann. She was half Arabian and her death at 25 was a “sad” day for the Mann family and the guests that often visited the Mann family farm, including my own father. The clothesline has long sense been removed, but a day at the Mann family farm was etched in history revisited 120 years later.

From the history of these people, I’ve uncovered more than just a history of their lives. Their courage and ability to survive through death, sickness, an unforgiving landscape, and their sense of family and faith have served to re-energize my own sense of worth and purpose. I am because they survived.

Despite my father’s death this year, I tilled the garden that we had planted and sowed more seeds. Starting my own business and dealing with his estate made the time in the garden seem like a waste of time. Watching the garden grow alone was hard. When all the plants suddenly died in August, leaving a hundred watermelons in a weekend to haul and pickup by myself, I thought about giving up. Yet, there was one small melon that hung on until the 2004 Oklahoma State Fair. I decided to finish what my father and I had started. The site of a blue ribbon stuffed beneath the melon on the table brought a flood of tears, but it also brought a greater sense of pride and achievement that I so needed to move forward with my life and my new business.

My journey into the past and my recent visit with Dorothy Mann Tillery revived that tenacious will to survive and succeed that defined Lucretia and her ancestors. Dorothy lost her husband in 1969, just a year after they bought a business in Wichita. She quit her job as a bank teller and molded this fledgling business into a million dollar enterprise.

There is still more to discover and learn about my family. But the legacy of two families connected to a farm in Kansas and the memories of a small child will continue to inspire generations to follow. My legacy is not unique. America was founded on a spirit of adventure and the dream of opportunity handed down to the next generation. The stories of our heirs can give us so much inspiration and I hope that is the message I have conveyed by sharing my own family history.

Lucy J. Collier, Daughter of Lucrecia Collier. After the death of Lucretia in 1882, Lucy moved from Adams COunty to Kansas and lived with AJ and Emily Mann. Lucy never married, and is buried in Walnut Hill Cemetery, Kingman, Kansas. 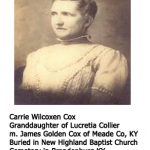 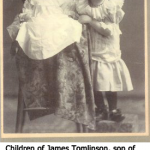 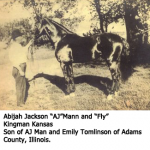 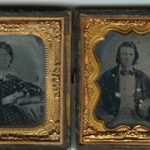 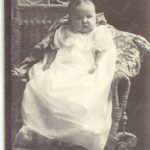 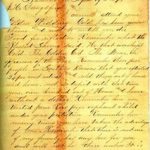