The Lyerly family originally came from Lake Constance, Germany in 1754 landing in Philadelphia. The Lierly name has been changed many times due to the whim of census takers. Lyerla, Lierly, Lierle and many other spellings are known. The spirit of those early family members has been passed from generation to generation. Today, the Lierly family members still have a spirit about them like that ole’ Zach must of had when he first left North Carolina to venture and settle in the wilderness. Johann Christopher Lyerly settled eventually in Rowan County, N.C. He had a son Zachariah (Zacharias) who was born in Culpepper, VA. on June 2nd, 1756 or 1755. The Lyerly’s lived in Virginia for ten years prior to moving to North Carolina.

Even when Zach was a young man he was adventurous and wild. His father, John Christoper Lierly, who came from Germany on the Richard and Mary had a hard time rearing that young man. In John will he spoke of leaving his son Zach just one shilling because he had spent his share gambling and drinking and also cursing and even laying hands upon his father. So when Zach left to go into the military he was a man ready to take on any wilderness that was around. Jacob, Peter and John Jr. Lierly, his brothers, spread throughout the regions themselves. John also settled in Illinois. Peter stayed in the Salsebury, N.C. area and creating a branch of the family there and then Jacob and his descendants went south into the Georgia area. Today there is a Lyerla, Georgia. Zach also had a sister named Barbara.

Zachariah fought in the Revolution from Rowan County, North Carolina. He began his service about 1777 serving for about 5 years. Serving 4 years 10 months for himself and 3 months as a substitute for Melcher Elder. His commanders were Gen. Rutherford, Col. Locke, Gen. Greene. He served with the North Carolina Line from Rowan County as a private under Capt Thomas Cook, George H. Barger and Richard Grimes companies. He fought in the battles of Reedy Fork and Guilford Court House.

He moved to Union County in Illinois with his sons, Henry and Jacob, about 1818 or 1819. He established his family in Union County which today is a well-known family with street names and such named Lyerla. He moved to Jackson County in 1823. In Jackson County he filed for a pension for his military service. It was approved by judge Thomas C. Brown in the Circuit Court of Jackson County, Illinois, October 9th, 1832. His pension Claim Number was S32389. Certificate number was 19685.

Zachariah moved to Adams County in 1842. He died in Adams County March 15, 1847. At the time of his death part of Adams County had become Highland County and was also known as Marquette County for a short time. These changes began in 1843. By 1848, with the new Illinois Constitution, Highland and Marquette Counties were defunct and the area became Adams County again.

Zachariah moved to Adams County following his son William who had moved to that county in 1827. Other pioneers moved too following German Baptist Minister George Wolfe in 1831. George Wolfe was totally against slavery hot issue in Southern Illinois at that time. Wolfe’s ministry was located in Union County. So most likely during this period a large following of families moved from Union County. The Hunsaker, Vancil and Grub families moved to Adams County about the same time and also married into the Lyerla family.

Now to more info, which I have collected just recently and am still investigating at this time.

Ole’ Zach is somewhat of a legend in my family. I am a descendant of his from the southern Illinois group of Lyerla families. In a book which was found at the Lutheran Church in Liberty (One Hundred Years of Union) and also a book written called (Soldiers of the American Revolution Buried in Illinois) which was written by the Illinois State Genealogical Society in 1976 which was a Bicentennial project of the American Revolution which was found at the Waterloo, Illinois Library. The book states that Zachariah was buried in Lierly Cemetery, Kellerville, Adams County, Illinois. He was one the early settlers in Adams County. He served eight years under George Washington. He died shortly after his arrival in this new land. He was given special burial as the only Revolutionary War Veteran in Adams County. With him was buried a Frenchman. In an early history this Frenchman is merely Tournear. This story has come to our attention concerning this Frenchman. When Napoleon was taken prisoner in 1815, he had two bodyguards. One man was killed, the second man escaped and disappeared. This Frenchman named Tournear, who was buried near Liberty in the late 1830’s, is believe to be the long lost Napoleonic guard. These two illustrious men are buried a short distance from the village of Liberty on the Merle Koch farm. (Which is also known as five points.)

Now to the facts…a Lierly cemetery is located near Siloam Springs State Park. There is a gravestone there with various Lierly names, which I believe at this time to be relatives. At first I thought I had found Zach’s resting place there. But after a few days research I realized that the cemetery where Zach was buried was located on the Robert Hummel farm as it is known today. It is located east on 104 towards Liberty about 200 yards directly behind the open field on the north side in a cluster of trees. There is a small opening leading to both gravesites along with other family members of both men.

Here are few pictures of the cemetery as I saw it last weekend (August 2000). I found the cemetery to be poorly maintained. The gravestones are in good shape for as old as they are. Weeds and wild blackberries have grown over much of the area. A few tombstones are broken but the pieces are present. I would believe that they could be restored very easily. At this time, I would appreciate any help trying to get this cemetery cleaned up along with a memorial to Zachariah. I do understand this is on private land at this time and this may cause some concern. But it would be a shame for the site to be lost to time. 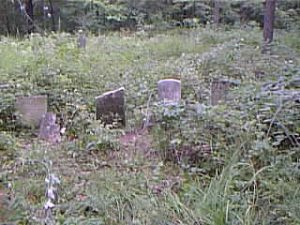 History only speaks of those men who commanded the troops, not of the many that actually placed their lives in the hands of god to fight for a cause which they did not understand at the time. Today, as we drive to work on the expressways or turn on the television, how many of us actually know that our ancestors made it possible. Many battles have been fought in so many wars since the Revolutionary war. Our independence was created by those men. They were outnumbered and overpowered but they had a will to win. Many young men died in that first war just as they have in today’s time in Korea, Viet Nam and the Middle East, still fighting for the same causes. Each and every one of these soldiers should have a page in the history books.

Any information or anything that could help me give my ancestral grandfather a decent burial site would be appreciated. The idea of my grandchildren being able to proudly tell their children the story and then being able to visit his gravesite would be one of the best things I could leave to them. I am personally proud of Zach and what he was as a man. I believe that a man with such a colorful history, a man that helped form this country should not be forgotten.