Notes on George: died of asthma in Camp Point. May have been captured in the civil war. Enlisted in the Illinois 78th infantry company G of the union army as a recruit 8-9-1862…mustered out 6-22-1865. Wife Amanda said he lived in Illinois 72 yrs. This contradicts the Census records.

Children of George Longcor and Amanda Howard are:

Source and accuracy of this data has been lost but is believed to be correct. 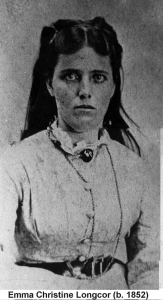