Surviving are a daughter, Mrs. Pauline Baugher [1]Pauline Virginia Buss married three times, first to Lester Waite, then to Mr. Braugher and later to Harold Jones., and a son, Harold Buss, both of Quincy; a sister, Mrs. Ella Chamberlain, of Chicago, five grandchildren, and five great-grandchildren.

A brother and four sisters preceded him in death.

Funeral services will be held Friday at 1:30 pm in the Cookson Daugherty Colonial Chapen, the Rev. James Thomas officiating. Burial will be in Golden Cemetery at Golden. 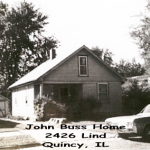 Probably from the Quincy Herald-Whig

Thanks to Pauline Buss and Jan Brown.